Lost Dogs in the Rain 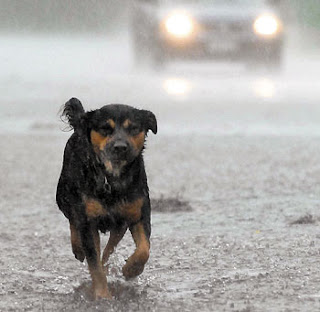 So I’m driving home…. It was one of those rainy cold nights we get in the winter. I’m not sure what time it was, but I was the only car on the road.

I see this dog walking on the side of the road on Highway 22. Now, I’ve had dogs all my life. I love ‘em, and I couldn’t just keep driving and leave this dog out there. I pulled over on the shoulder and rolled down window. As soon as I did, this dog (who was soaking wet) stopped walking and looked at me.

I whistled, and I could tell I got his attention, but all he did was look at me.

I reached across my console, opened the passenger door into the rain, and patted the seat… The dog just looked at me. He didn’t run away, but he got no closer to me either.

“What's the matter with this stupid dog?” I thought. “It's cold, dark, and raining - doesn't he know I'm trying to help him here?”

“If I leave him out here, he's gonna wander into traffic and get killed.”

Crap - I'm gonna get soaked but I can't leave him here. Suppose it was my dog Rigby out there? I'd want somebody to pick him up.

Reluctantly, I put the truck into park and got out. The dog saw me approach, and welcomed me with a low growl. I could see his hair, wet as it was, come up on his neck.

I got down low, and put my hand out to let him smell it as I walked slowly to about 5 feet of him. He took a cautious step towards me. And then, another.

The poor dog was shaking – I’m not sure if it was with fear or cold..

I slowly reached for head to pat him, and he turned to watch my hand the way only dogs can do. I could tell he’d been tricked before. He didn’t seem like he’d bite me unless I provoked him, so I patted his head gently until he was ok with that.

He was wearing a collar – and I started to reach for it. The dog growled and flinched simultaneously. “One hand at a time, Mike,” I told myself as I patted his head and slid my hand down his head to reach for his collar and see if there was a name on it. Turning the medal in the dim light, I could see a name – Dave.

“Hi, Dave” I said in the voice we have for talking to dogs. “I’m gonna get you home now.” I looked back – my truck’s door was still open.
I knew I couldn’t pick him up to put him in the truck, so I went to Plan B.

Stepping back to the truck, I called the dog. No deal, he just looked at me.
I went back to him, petting him and talking softly until I felt the time was right to try again.

I took a step back, and called him again – “C'mon Dave!”
He took a hesitant step towards me..

I stepped back again, calling him, and he took another hesitant step.
And again.
And again.

Finally I reached the truck… I patted the seat and he cautiously got in.

Closing the door and hoping he wouldn’t go beserk if he felt trapped, I quickly ran around to my side. By the time I got in, Dave was sitting up in the passenger seat. I could tell, he had ridden in a truck before.

As I drove away, I thought to myself….

He wasn't scared of the truck.

He was scared of me.

I’m soaking wet and freezing, but at I dialed the telephone number on his collar, I breathed a sigh of relief. I’m gonna get him home safe.

This is a true story

Well, except for the name

His name wasn’t Dave – it was Tony

And it wasn't actually raining. He was just caught in that storm that I know is life without God because I lived it for 35 years.

But just like the dog was scared of me and not the truck, people aren't scared of God, they are scared of the church.

And we (the church) can't show them what God has done for us until we get past that fear.

But the first step is getting them close enough to hear us.. to listen… To not feel threatened by who we are or what we say…. To know we are people like them, with bad days and bosses who do stupid stuff and kids that won’t listen and spouses who don’t always agree…

The difference in our lives is the peace God has given us, the peace He offers all of us… If we accept it…
Posted by Mike Manifold at 3:37 PM